Skip to main content
It looks like you're using Internet Explorer 11 or older. This website works best with modern browsers such as the latest versions of Chrome, Firefox, Safari, and Edge. If you continue with this browser, you may see unexpected results.

1.      What are Eurocodes?
Structural Eurocodes are a set of  harmonized European standards for the design of buildings and civil engineering structures. There are 10 of them made up of 58 parts.

·         All have prefix SS EN while the original European standards each has prefix EN.

·         Each Eurocode that Singapore adopts has a National Annex which must be used in conjunction with it. The prefix to National Annex is NA to SS EN

5.      Does the Library have all of the Eurocodes that Singapore has adopted and the accompanying National Annexes?
Yes. The soft copy is Singapore standards database. Downloaded from the database is not possible. Use IE or Microsoft Edge only.The hard copies are at the Closed Stacks

Closed stacks are special storage areas not accessible to users. Typically old or low circulating items are stored there. This helps to save space since items stored in closed stacks can be stored more compactly.

If you need access to closed stacks item, please request the item online first and we will then retrieve the item for you to collect at the appropriate loans desk.

7.      Does the Library Have All of Structural Eurocodes that Britain Has adopted and the Accompanying National Annexes?
Yes. They are in British Standards Online

8.      If the Singapore standard, e.g. SS EN 1991-2 (2010) has been misplaced, can I use the soft copy of BS EN 1991-2:2003 from British Standards Online?
It depends on whether Singapore follows the December 2004 and April 2010 amendments that the British made. Do not let the date 2003 mislead you into thinking the standard was last updated in 2003. You need to click on View details, followed by Quick view or Download PDF to check for updates. 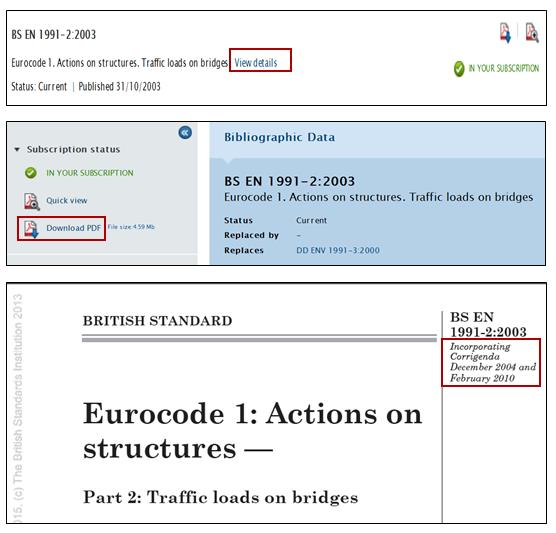 The Library is unable to advise if Singapore follows any of the corrigenda for any of the British standard.

In the British standard itself, the start and finish of text introduced or altered by amendment is indicated in the text by tags. E.g.

i.      What is indicated within those tags might not apply to Singapore.

ii.      The rest of the British standard is exactly the same as the Singapore standard and the original European standard.