This section features discontinued series of law reports and modern law reports as well as case digests relating to Singapore.

The resources are arranged roughly by date of publication and are generally available in the Law Library, unless otherwise stated.

Unless otherwise stated, the contents in this guide Historical Sources of Singapore Law © by National University of Singapore Libraries is licensed under CC BY-NC 4.0 . Attribute and link back to this LibGuide if you are going to re-use the content.

Identify the legal abbreviations of law reports using these online and print resources:

Step 1. Identify the legal abbreviation in the citation using an index.
For Singapore cases, use the Singapore Legal Abbreviations index. In this example, SSLR stands for the Straits Settlements Law Reports. 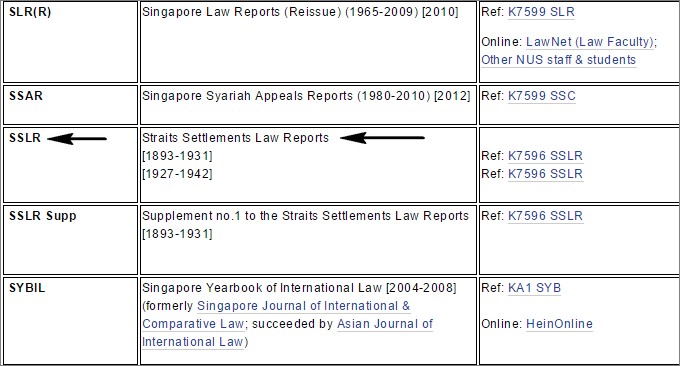 Step 2. Run a Title Search for the law report in LINC:

Step 3. Select the relevant title from the results list.

Step 5. Once you have retrieved the relevant volume from  the shelves, turn to the first page of the report, which in this case is page 172.

*Lexis Advance Singapore
Search the Malayan Law Journal for Singapore cases from 1931 to 1965.

NewspaperSG
Newspapers are a good source of case information, particularly unreported judgements. This digital archive, maintained by the National Library Board, contains historical Singapore and Malaya newspapers from 1831 to 2009.

*War Crimes Case Files, Second World War - WO 235
This series contains the trials of Japanese war criminals by the Military Court in Singapore for crimes committed in Southeast Asia during the Second World War.

Mallal's Digest: Case Citator 1932 to 2015
K7599.3 Mdc 2016 (LW Reference 1)
Alphabetical table of annotated cases containing references to all subsequent cases in which the annotated cases have been judicially considered.

Alternatively, look under "Case References - Referring" on the left panel of the screen for annotating cases. 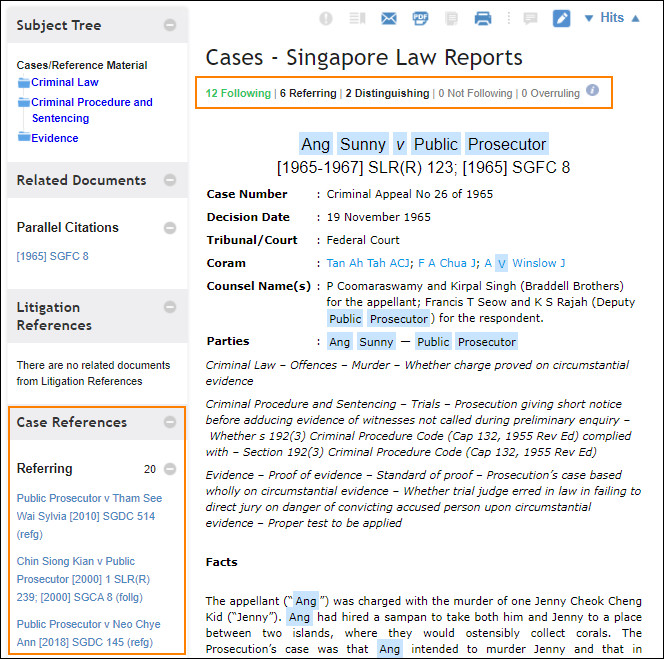 Mallal's Digest ... : being a Comprehensive Statement of the Case Law of Singapore and Malaysia for the Year ... [Mallal's Digest Yearbook]
K7599.3 MDY (LW Reference 1, LW Sing-Mal Coll)
Annual compilation, in digest form, of reported cases decided by the Singapore superior courts and all relevant unreported decisions.