The Administration of Muslim Law Act 1966 (2020 Rev Ed) ("AMLA") sets out the powers and ambit of the key Muslim institutions in independent Singapore, outlining the structure and authority of three key Islamic institutions: the Islamic Religious Council (Majlis Ugama Islam Singapura or “MUIS”); the Registry of Muslim Marriages (“ROMM”), which administers marriages under Muslim law; and the Syariah court system (Nizam, 2012 at 166-67).

The graphic below provides a brief overview of the framework for Islamic legal institutions in Singapore: 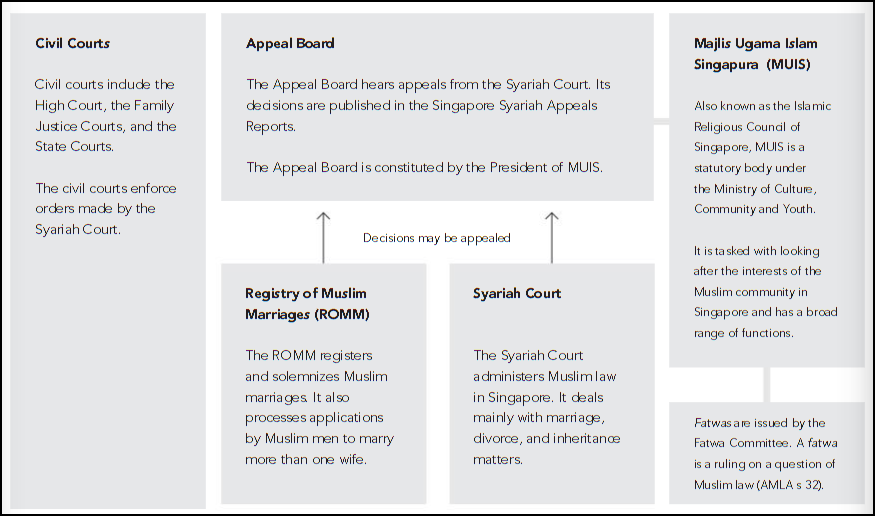 For a list of legislation relied upon by the Syariah Court of Singapore, refer to this list.

For a brief background on AMLA, check out National Library Board's Singapore Infopedia article which includes a list of references. 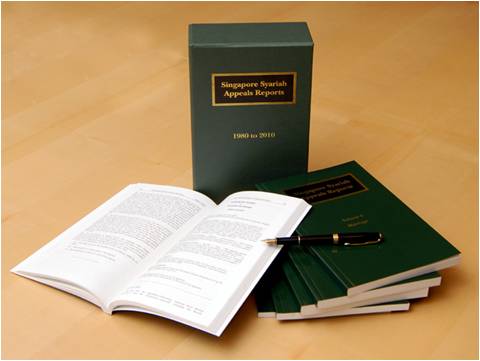 Read more below about the launch of the SSAR, an important milestone in Singapore's Muslim law jurisprudence:

The Singapore Academy of Law Annual Review (SAL Ann Rev) is an annual conspectus by leading practitioners and academics that encapsulates and evaluates decisions of the Singapore courts in the preceding year, as well as selected cases from other jurisdictions. Coverage of Muslim law begins from 2014.

Section 114(1) of AMLA sets out the sources of Muslim law which a judge can rely on in determining disputes on inheritance and succession.

s 114(1)(a): English translation of the Quran by Marmaduke Pickthall

The word fatwa comes from the root word fa-ta-ya ( فَ-تَ-يَ ) which means “to explain”. Semantically, fatwa also means “informing a point of law from a question; an answer to a question related to an unclear legal point.”

In Singapore, Fatwas are regulated under section 32(1) of the Administration of Muslim Law Act on Rulings (Fatwa):

Rulings (Fatwa)
32.—(1)  Any person may, by letter addressed to the Secretary, request the Majlis to issue a fatwa or ruling on any point of the Muslim law.

Acknowledgement: We wish to thank Zamiq Azmeer '18 (LL.B. (Hon.) NUS) for his advice and invaluable assistance in providing the resources under "Fatwas" and "Irsyad."

"Irsyad" has been defined in Singapore by the Office of the Mufti, MUIS as follows:

Irsyad is a religious guidance issued by the Office of the Mufti. This irsyad aims to address various issues related to Islamic practices and perspectives on current development.

It should be noted that Irsyad has hardly any legal weight compared to Fatwas because it is not provided for under the Administration of Muslim Law Act or any subsidiary legislation.

Acknowledgement: We wish to thank Zamiq Azmeer '18 (LL.B. (Hon.) NUS) for his advice and invaluable assistance in providing the resources under "Fatwas" and "Irsyad."

Helpful and concise introduction to the Islamic legal system in Singapore, including the key Muslim institutions (MUIS, Syariah Court and ROMM).

Provides a bird's eye view of AMLA and examines the law and practice of Muslim family law in Singapore.

The author tracks the development of Muslim law in Singapore with focus on both historical and contemporary elements.

Prof Hooker, an expert who has studied Singapore and South-east Asian Islamic law for decades, examines the development of positive law (fiqh) in Singapore. It pays particular attention to the Select Committee Reports for their role in highlighting legal debates within the Singapore Muslim community.